Please come along to support Bernard

May 17 is the start of Bernard Collaery’s hearing for his appeal against the secrecy in his trial.

How can  Bernard Collaery and Witness K being charged as a result of the government bugging the Timor Leste government offices during the negotiations for the Timor Sea oil and gas negotiations be in the public interest?  This was to gain advantage in the negotiations, against the interests of our poor neighbour, Timor-Leste, primarily for the benefit of companies such as Woodside Petroleum.

The charges against these men of integrity are a threat to our system of open justice and a threat to democracy.  They must be dropped! 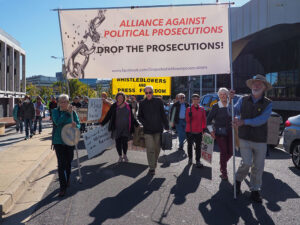 Aims of the Alliance Against Political Prosecutions (AAPP)

AAPP is a coalition of groups and individuals advocating for truth and open justice in the matter of Bernard Collaery and Witness K and whistleblowers David McBride and Richard Boyle;

AAPP condemns politically motivated prosecutions, demands the discontinuance of the cases against such people, and calls for the provision of appropriate financial restitution;

AAPP supports whistleblowers and others whose actions result in serious wrong-doing being brought to public notice;

AAPP opposes the use of secret hearings in such trials – transparency and open justice should remain a high priority in our justice system.

AAPP supports Julian Assange in his fight against extradition to the US and calls on the Australian government to provide every support to him to bring him home to Australia.