The Independent and Peaceful Australia Network invites you to a

At this time of ongoing tensions in the South China Sea and the Middle East, and when it becomes more obvious day by day that America is a ‘dangerous ally’, the forum will provide a timely opportunity for discussion of possible practical paths to peace for Australia:

*  The implications of neutrality for the defence of Australia.

Come along and join the discussion on Australia’s future as a responsible global citizen.

Dr Broinowski worked as an Australian diplomat, including in Manila, Tokyo, Amman, and New York, where she was in the Australian Mission to the UN. She also worked as a journalist and author in Japan, Burma, Iran, South Korea and Mexico. She has written or edited 14 books, and was co-editor with David Stephens of The Honest History Book 2017.  She is Vice President of Honest History and Vice President of Australians for War Powers Reform.

Dr Peter Stanley – What form might a neutral Australia take?

Dr Stanley is a historian who worked for many years at the Australian War Memorial (where he was principal historian) and also at the National Museum.  Peter has published more than 30 books, mainly in the field of military history, has writes historical fiction as a hobby, publishing ‘Simpson’s Donkey’ (2011, a children’s book) and ‘The Cunning Man’ (2014) 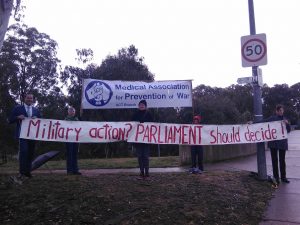