The Coalition’s decision to protect a global arms manufacturer’s commercial interests by suppressing criticism of a $1.3bn military deal risks setting a dangerous precedent that limits independent scrutiny of government, the auditor general has warned.

Late last year, the French multinational defence contractor, Thales, was staring down the barrel of an as-yet unpublished auditor general’s report, which made serious criticisms of its deal to provide Australia with 1,100 locally built Hawkei light protected vehicles.

Thales sought to thwart the report’s release, asking the federal attorney general, Christian Porter, to intervene in January, while simultaneously launching legal action against the auditor general in the federal court.

Thales wanted Porter to use his powers to suppress sensitive information from the report because its release was contrary to the public interest and would “unfairly prejudice the commercial interests” of the company.

Those powers, typically considered a last resort, have never been used in such a way before.

Porter eventually granted Thales’ request in late June, and went further, issuing a certificate to suppress parts of the audit not only because it jeopardised Thales’ commercial interests, but also threatened Australia’s national security, defence or international relations.

Large slabs of text in the report were blacked out when it was finally released last month.

Now, in a damning submission, the auditor general, Grant Hehir, has revealed the material suppressed from his report had been checked with the defence department to ensure it was not a threat to national security. Hehir remains “unaware as to why” national security concerns were used to justify the omissions.

“Having worked through all national security issues with the Department of Defence in the course of the audit, the auditor general remains unaware as to why the reasons… relating to prejudice to the security, defence or international relations of the Commonwealth – apply to the information that the certificate requires be omitted from the report to Parliament,” the submission said.

Other documents suggest the decision to raise national security objections was made after advice from the defence and defence industry ministers.

Hehir said the redactions removed non-sensitive information including his office’s analysis and part of its conclusion, which assessed “the effectiveness and value for money of this Defence acquisition”.

The auditor general also warned that redacting information because it threatened a company’s “commercial interests” risked setting a dangerous precedent, particularly in reports on military contracts. Any report that criticised — or was perceived to criticise — military contracts would “almost always be seen by the private partner as prejudicing their commercial interest”.

“The certificate creates uncertainty in all future audits of Defence acquisition and sustainment — which represent a major portion of the ANAO’s annual audit effort in the Defence portfolio and potentially other audits of government acquisition,” he said.

“The treatment of sensitive information arises regularly in the context of Defence auditing, and it would be of concern if this certificate set a precedent for government to regularly suppress elements of an auditor general’s conclusion and ANAO analysis in a public report, particularly where the conclusion and analysis contain information that is not otherwise protected from public disclosure.” 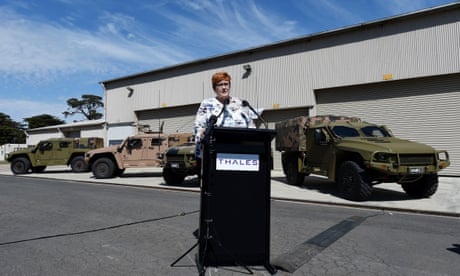 Thales dropped its court action less than two weeks after Porter exercised his powers, according to the auditor general and court records.

Thales then made a second bid to Porter to have additional material redacted, but withdrew it when the auditor general made a decision to remove it of its own will, in a bid to release the report without further delay.

The fight over the report had already delayed its release by more than six months. It was originally supposed to be tabled in December, but the redacted report was not released until September. The government’s procurement of the Hawkei vehicles continued in the meantime.

The redacted report last month questioned claims that the Thales contract would benefit regional Australia and raised early reliability issues with the Hawkei, which defence says are normal for such a project. It also criticised Australia’s decision to stop considering a rival bid from the United States, because it left Thales without competitive pressure and the government without a benchmark for the work.

READ MORE AT THE LINK ABOVE

AND PLEASE SUPPORT THE GUARDIAN – ONE OF THE FEW INVESTIGATIVE AND CREDIBLE NEWS SOURCES.