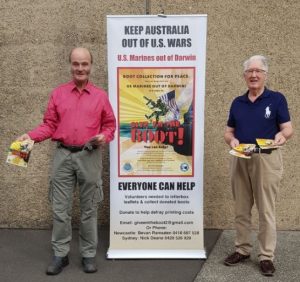 Peace Volunteers needed for letter boxing IPAN Campaign leaflet “Give ’em the boot” in all capitals and regions: this is an Australia-wide campaign. Only one hour of your time will letter box 250 leaflets; it would be your contribution to help Keep Australia out of U.S. wars by campaigning for the clearing a U.S. military base out of Australia  and thereby dissociating ourselves from the US military activities aimed at our neighbours to the north. The printing of the leaflets is the major costs of this campaign hence donations are most gratefully received

Why it’s vital that the US marines leave Darwin.
Many Australians are completely unaware that a portion of their country is routinely occupied by the armed soldiers of a foreign nation.
Up to 2,500 US troops are stationed in Darwin under the U.S. Force Posture Initiative to which Australia has agreed for 25 years. It also facilitates the use of Darwin and Tindal’s aircraft runways and supply facilities for use by U.S. bombers such as the B1 which is capable of carrying nuclear bombs. It makes NT a base from which the U.S. can launch war activities against our neighbours, including North Korea and China. It makes Australia a target by U.S. enemies and implicates Australia in their military activities.
The announcement was made in 2011, that up to 2,500 US marines were to be stationed in Darwin. There was no parliamentary debate, no discussion in the media beforehand – it was simply presented to the Australian people as ‘fait accompli’. No plausible justification for such a radical development has ever been provided by the Australian government.
These US marines are kept in a state of constant readiness to ‘fight tonight’; they represent a forward military deployment posture of the U.S. on command from Washington. The Australian Government has no control over these US military forces and cannot veto any military action they might take. Australia’s sovereign independence has been lost.
The Australian public should be under no illusion that the U.S. Marines are here for our protection. For one thing, we need no assistance in our own defence – the ADF is quite capable of defending Australia. We are hosting US forces on our territory, that could be used to attack some other nation, if that suited the USA, regardless of Australian interests.
Any enemy of the USA (and it has plenty!) could, would, also regard Australia as an enemy. The US Marines stationed in Darwin actually increases the chances of Australia sustaining an attack.
• It makes us a target!
• It makes us less, not more, safe!
• It makes us enemies, when we need have none!
• It means that we are being exploited by the USA, for its own purposes!
In every other country where US forces are stationed there have been problems of crime between servicemen and the local community. Crimes of a sexual nature can be anticipated in Darwin.
Significant increased environmental costs are imposed by the marines presence. Globally, all military activity is highly polluting and destructive. Damaging chemicals (e.g. explosives) pollute land and water, as do spills of fuel etc.
It is costing the Australian tax payer a significant proportion of the stated $2-3 Billion necessary to establish this US military presence in Australia plus their annual maintenance costs. These tax payers dollars could be much better spent on socially needed areas such as reducing health and hospital costs, improving education and contributing to pensioner survival.
To regain independence and self-respect, and for a peaceful future , we say
GIVE ‘EM THE BOOT!
Volunteers needed to letterbox campaign leaflet
Email: giveemtheboot2@gmail.com or contact for Sydney, Nick Deane on 0420 526 929
for Newcastle, Bevan Ramsden on 0418 697 528