Invitation to add your name as a supporter of the statement

Increasing numbers of ordinary Australians believe that the prosecutions of Witness K and Bernard Collaery are travesties of justice and contrary to our national interests.

It is clear that the Australian government bugged the offices of the Timor-Leste government during negotiations over Timor Sea oil resources in 2004. The agent known as Witness K and his lawyer Bernard Collaery are now subject to a secretive, drawn-out prosecution being conducted under legislation designed for terrorists. There is a real danger to our justice system and our democracy through these secretive trials.

More and more people are organising to support Witness K and Bernard Collaery. We intend to increase the growing public awareness of this matter, and are calling for the Australian Government to drop these secretive prosecutions.

As part of this activity, we ask if you would be willing to endorse the attached statement, which we plan to publish in various ways together with the names of endorsees. To reply, please email Sister Susan Connelly or Kathryn Kelly at the addresses below, and it would be very helpful if you would state how you would like your name to appear. Our group would appreciate your reply by Thursday 10th September.

Our group hopes that you might assist in circulating this statement and providing one of the email addresses below for responses.

Australians from all walks of life are ashamed and angry when they learn that the Australian Government spied on the East Timorese Government offices during oil and gas negotiations in 2004, under the guise of implementing an Australian aid program.

This act of spying cannot be justified as protecting Australia’s defence or security interests. It was a deceitful act performed against an impoverished trading partner where both sides had promised “good faith” negotiations.

It was espionage aimed at gaining commercial benefit on behalf of resource companies to the disadvantage of the people of East Timor––our close neighbour, loyal ally in World War II, and the poorest country in South East Asia. It has damaged Australia’s reputation for honest and fair dealings with our neighbours.

This activity may have remained secret but for the courage and integrity of one of the spies, “Witness K”, and his lawyer, Bernard Collaery. These men acted in good faith at a time when our government failed to do so. They bravely stood up to government wrongdoing. The Australian government commenced prosecutions against them in May 2018, without explanation.

Internationally accepted minimum standards for fair trials are challenged by the numerous hearings held since charges were laid, constant delays and postponements, strict secrecy provisions concerning evidence, and frequent closures of the court to the public. All of this is claimed to be required by national security.

These dubious prosecutions threaten the rights and values of every Australian.

The Attorney-General has the power to discontinue the prosecutions under the Judiciary Act 1903 – Section 71. We call on him to drop the prosecutions of Witness K and Bernard Collaery immediately. 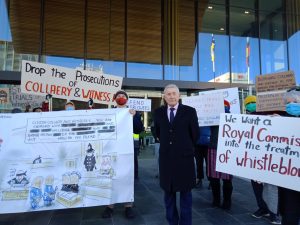