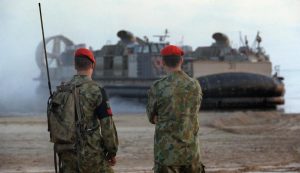 Another 1,150 US Marines will arrive in the Top End, bringing with them a plethora of vehicles, weapons and ammunition (Photograph: Patrina Malone/PR Image

Rex Tillerson’s cosy relationship with the Russian government was set to be the big controversy of his confirmation hearings to become the next US secretary of state. But it was the subject of Chinese construction in the South China Sea, and his statement that Chinese access to their facilities on the islands is “not going to be allowed”, that held the biggest implications for American foreign policy and security in Asia Pacific.

The suggestion of a more aggressive, interventionist, American regional involvement highlights the pressing task of developing a more independent foreign policy for Australia.

The US marine base in Darwin is an important component of this regional military build-up, and the implications it holds for Australian freedom of action should the US decide to militarily intervene in the South China Sea are troubling. The Marine Air-Ground Task Force stationed there specialises in the exact amphibious operations and integration with air assets which would be necessary to enforce the kind of intervention that Tillerson has called for.

Australia’s ability to dictate the terms of use of American military assets stationed in our country, should conflict with China arise, is extremely doubtful. As is our ability to influence the shape of the US presence in Asia through our alliance if it takes the form of raw US hegemonic interest and overwhelming military power, rather than an anchor within a framework of the diverse interests of states in the region.

Tillerson’s comments on intervening in the South China Sea may come to nothing, he may not even pass his confirmation hearings. Regardless, they are a stark reminder of the stakes involved in military conflict in our region, and Australia’s ability to independently navigate them. Australian policymakers must commit to a more robust engagement with our own

Both the late Malcolm Fraser and Paul Keating have broken ranks with their political parties, Liberal and Labor, urging Australians to reconsider the ANZUS Alliance.

Dr Alison Bionowski, a spokesperson for the Independent and Peaceful Australia Network representing diverse community organisations across the nation, is taking their warning seriously.

“Donald Trump will become President of the United States of America this week. He has nominated Rex Tillerson as Secretary of State and General James Mattis as Defence Secretary. These men are making alarming statements which may threaten war with nuclear armed China and Russia. ”

“Just this past week the USA has moved tanks and military personnel into Europe to be stationed on the border with Russia which can only be considered a provocative act,” said Dr Brionowski.

Paul Keating warns that Mr Tillerson is calling on Australia as an alliance partner, to support a marine blockade of the South China Sea islands to which China lays claim.

“This is dangerous brinkmanship,” Dr Brionowski said, “and we only have our subservient Australian political leadership of the past 16 years to blame.”

IPAN supports former Prime Minister, Paul Keating, when he says “We should tell the new US administration from the get-go that Australia will not be part of such adventurism, just as we should have done on Iraq 15 years ago. That means no naval commitment to joint operations in the South China Sea and no enhanced US military facilitation of such operations.” 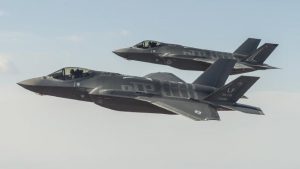 And the vast army of Australia’s Joint Strike Fighter contractors are also in jeopardy because our government, led by Defence Industry Minister Christopher Pyne, has not woken up to what it means to have Donald Trump as US President.

And so, in the lead-up to Christmas, Trump issued a very carefully prepared tweet: “Based on the tremendous cost and cost overruns of the Lockheed Martin F-35 (JSF), I have asked Boeing to price-out a comparable F/A-18 Super Hornet!”

And so, in the lead-up to Christmas, Trump issued a very carefully prepared tweet: “Based on the tremendous cost and cost overruns of the Lockheed Martin F-35 (JSF), I have asked Boeing to price-out a comparable F/A-18 Super Hornet!”

Senator Lee Rhiannon asked the Attorney-General, upon notice, on 16 November 2016:

With reference to the United States’ ‘drone assassination program’, which targets the nationals of countries with whom Australia is not at war and is facilitated through Pine Gap:

(1) Is the ‘drone assassination program’ legal under international law, and can the legal references informing the response be provided.

(2) Has the Australian Government considered or been provided with advice regarding whether the program is legal under international law; if so, can details of any consideration or advice be provided.

(3) If the above ‘drone assassination program’ is illegal under international law, is the Government aware of any legal arguments that could support the notion that the Australian Government and the people of Australia could be complicit in illegal acts for hosting the Pine Gap Joint Defence Facility, and has the Government considered this question previously; if so, can details be provided.

Senator Brandis – The answer to the honourable senator’s question is as follows:

The premise of the Senator’s question is not accepted. Australia’s security and defence cooperation with the United States enhances Australia’s national security and occurs in a manner that is consistent with our obligations under international law. Consistent with longstanding practice, the Government does not comment on intelligence matters or on legal advice provided to the Government.

In 10 weeks, governments will gather at the United Nations, New York, to start the negotiations of a new treaty prohibiting nuclear weapons.

This could be a historic moment, and we will do everything we can to make sure that nuclear weapons soon will be banned globally.

On this website, you can also take action and email your government and tell them to participate in this historic process.

We’re excited about getting to work on this treaty, and hope you will support us in 2017 to prohibit the most destructive weapon ever created.

February, 2017 to develop strategies for implementation of IPAN’s objectives in 2017 and onwards.th and 5thIPAN State delegates together with some experienced peace activists are gathering in Sydney on 4

The Trump election and other political under- currents in the world including possible confrontation between the US and China in the South China Sea and US/NATO with Russia in Europe, the IPAN co-ordinating committee feels there is urgency in the situation and that IPAN needs to plan its activities and major campaigns with this political environment in mind.

The next edition of Voice will summarise the outcomes of this planning and strategy conference. 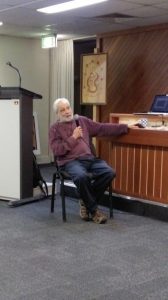 At the December Just Peace forum in Brisbane Willy Bach outlined his thesis on the Secret War in Laos. We were taken back to the time before the so called beginning of the Vietnam War when the preparations were taking place in the 1950’s. Apart from the understanding of suffering experienced by the people of Laos, the take away message was that wars don’t just happen with a trigger event like the Bay of Tonkin or the assassination of the Arch Duke Ferdinand….they are planned as any major operation requires. This raises the question about our current geopolitical environment.

Global efforts towards nuclear disarmament have taken contradictory directions in recent times: the momentous UN decision to negotiate a ban on nuclear weapons this year (from March) gives hope: but over the last few years, major nuclear powers have attempted to make nuclear weapons more use-able (not for the first time) by making them more precise whilst lowering their yields. At the same time technological ‘progress’ (how much is not clear) has been made in developing hypersonic delivery systems, which would be so fast as to be un-interceptible.

Morality versus technology – not always an even-sided contest. But one key way peace groups can make a difference in this critical contest is the tried and true tactic of divestment pressure. We in Australia don’t need to venture abroad to employ such a strategy, as nuclear-weapon-system manufacturing corporations have offices in Australia, and even more pertinently 4 major Australian banks have invested billions of dollars in such companies.

The International Campaign Against Nuclear Weapons (ICAN) has published a report, updated annually, on global investment in nuclear weapons and systems. The 20111 report revealed that Australia’s Federal Government Future Fund was one such investor, as were several Australian financial institutions. The latest update was recently published, and Australia’s contribution to the ‘Hall of Shame’ was as shameful as ever:

ANZ (Australia) has made an estimated US$ 2,019 million available to the nuclear weapons companies selected for this research project since January 2013.

Macquarie Group (Australia) has made an estimated US$ 1,943 million available to the nuclear weapons companies selected for this research project since January 2013.

Westpac (Australia) has made an estimated US$ 1,008 million available to the nuclear weapons companies selected for this research project since January 2013.

Commonwealth Bank of Australia (Australia) has made an estimated US$ 428 million available to the nuclear weapons companies selected for this research project since January 2013.”

Both ALP and Coalition governments have defended such investments, partly on the grounds that such weapons are not illegal under international law, and partly through ‘creative’ interpretations of the Nuclear-Non-Proliferation Treaty (though admittedly, nuclear weapons states have been just as ‘creative’ with the treaty). This adds further urgency to the UN process, but it is doubtful whether even that decision would move the financial institutions, as along with the military-industrial sector generally, such nuclear investments are very profitable.

This then brings the need for vigorous divestment campaigns around the world front-and-centre. The ICAN website “Don’t Bank on the Bomb” [http://www.icanw.org/projects/dont-bank-on-the-bomb/] provides some advice on how to build such a campaign, and it is something IPAN will be discussing at it’s national strategy conference next month.

Former Labour Foreign Minister, Bob Carr yesterday warned Malcom Turnbull against deepening defence collaboration with the US and described Mr Trump’s cabinet as being marked out by competing interests of adventurism and naivety as well as a dose of “healthy realism”.” Now is not the time to talk about further integration of our defence forces with those of the US because the US commander-in-chief is a raw amateur, to be blunt,” Mr Carr said. “Nobody knows what he is likely to do… Now’s the time for Australia to realise that foreign policies have got to be grounded in our own interests and our own values.”